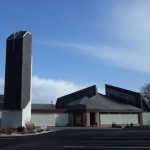 Breaffy Church today stands on a hill overlooking the road to Claremorris. Originally it was on land given in the early 1800’s by the Browne Family of Breaffy House, outside the Demesne Wall. Colonel Browne gave the site for a Church and School for his workmen and their families. A doorway was made in the Demesne Wall for access to the Church.

After many years of use, and several additions and re-designs, the original Church eventually outgrew the growing Breaffy area and was demolished in 1976, a very sad day for older parishioners. A new modern Church building was built, which conformed with the updated Church guidelines. The new Church was dedicated by Archbishop Joseph Cunnane in November 1979.

As Breaffy continued to grow, so did the need for a priest, and in 1980 the Archbishop appointed Fr. J.J. Cribbin as curate.