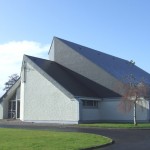 There is little known of the origins of the old church in Ballyheane, but it is likely that it had been a place of worship for at least 200 years, up to its time of closure. An entry in a parish book says that it was enlarged by Canon Patrick Lyons P.P. at the beginning of the 20th century.

Canon Sean Blake negotiated the site for the new church with Walter McEvilly in 1982. In January 6, 1984 the first sod of the church was turned and it was blessed and dedicated to St. Patrick on December 14, 1984. The architects were Taylor, Carr & Associates, and the contractors Sweeney Dicks Ltd., Ballyheane. The total cost was £250,000. According to the architects, the aim in Ballyheane was to ‘provide a place of worship which is unpretentious, a place of calmness, serenity and meditation, while presenting, at the same time, a visually striking and pleasing appearance’.

The church exterior is based on simple triangles to provide a striking sculpted effect and the landscaped site symbolises the relationship of worship to nature and the encircling mounds provide an atmosphere of mystery and sacredness.

The interior of the church allows an immediate relationship of sanctuary and congregation with no physical barriers between them. A sense of sacredness and uplift is created by its deeply shaped and simple planes sweeping up towards the natural sunlight mellowed by the antique glass of the high windows. The position of the sacristy at the rear of the congregation enables the celebrant to approach the sanctuary by means of a processional way through the congregation.

The baptismal font is taken from the old church, providing a sense of continuity between past, present and future generations. There is no evidence of a patron saint for the old church, but because of a strong tradition that St. Patrick visited and preached the Gospel in Ballyheane, the new church is dedicated to his honour.